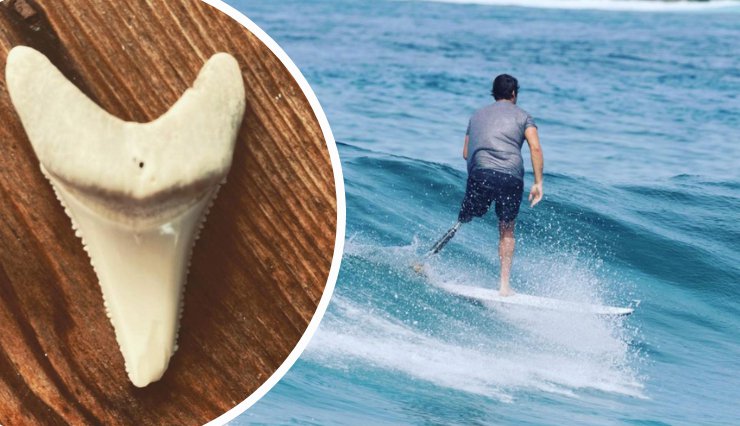 A tradesmen from Australia who lost his leg in a shark attack in 2015 has won a lengthy 6-year court battle that will allow him to keep the tooth of the predator that remained lodged in his surfboard.

Chris Blowes, who was 26 at the time of the of the attack, had his left leg bitten of by a great white shark while he was surfing at Fishery Bay in South Australia.

Miraculously surviving and since forging a career as a motivational speaker and author, the former tradesman has been battling the Department Of Primary Industries & Regions for the right to keep the tooth of the shark that attacked him as a souvenir and memento.

The bizarre issue - under Australia’s Fisheries Management Act it “is illegal to possess, sell or purchase any part of the protected species," with penalties up to a $100,000 fine (£55,600) or 2 years in prison.

However, after years of lobbying and pressuring state officials to make an exemption based on the remarkable circumstances, the now 32-year-old revealed on his Instagram account that finally - after 6 years - the department had finally agreed to hand the tooth over.

Speaking to ABC news, Mr Blowes said 'I'm just happy to have it back – a tooth for a leg, surely that's a fair swap.’

'It's ridiculous to think considering it took my leg and it was stuck in my board - it seems stupid that I wasn't able to have it in the first place, but that's what the law says.”

Incredibly despite an experience that would make most never want to enter the ocean ever again, Chris still goes out to surf with his specially made prosthetic leg.

His story has become so inspirational that people with disabilities all over the world regularly get in touch with him and tell him what a difference he’s made in their lives and the hope he brings all.

We think a leg for a tooth is definitely fair enough.