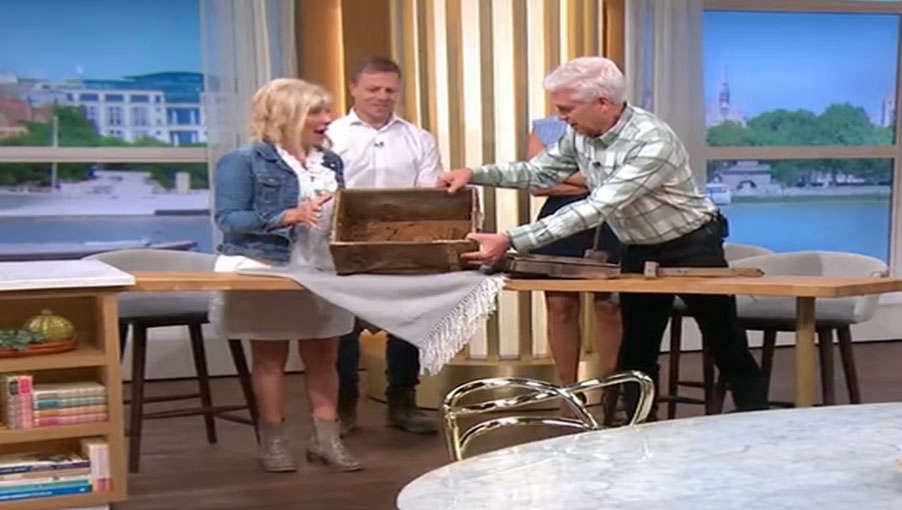 Phillip Schofield and Sarah Greene were left in shock on last week’s episode of This Morning (14 June), after what was supposed to be the grand opening of a Blue Peter time capsule from 40 years ago went awry, the Independent reports.

Greene was invited onto the show after builders recently discovered the time capsule from 1981 that had been buried while Greene was presenting the children’s series.

Schofield – who co-presented another kids’ show, Going Live!, with Greene from 1987 to 1993 – and This Morning co-presenter Holly Willoughby were both there to open the capsule with Greene.

The capsule, which had been put underground by a class in Samuel Lucas School in Hitchin in the carpark of the Television Centre, where Blue Peter was filmed, contained throwbacks to what life was like in the Eighties in the form of objects and drawings from the students.

But there was one slight problem – when the lid to the capsule was lifted, all the presenters could see was a big heap of brown sludge.

“Oh my god,” the broadcasters said to each other, before collapsing into laughter.

“I don’t think you need to see!” Greene exclaimed, trying to hide the capsule from view.

She added: “Perhaps we should have wrapped things up a little more… thoroughly.”

Willoughby said she thought that underneath the sludge there would be “something salvageable” wrapped in plastic.

The contents of the capsule was apparently a bit “whiffy”.

“It’s rust and age,” Schofield said, to which Greene quipped: “No, that’s just me.”