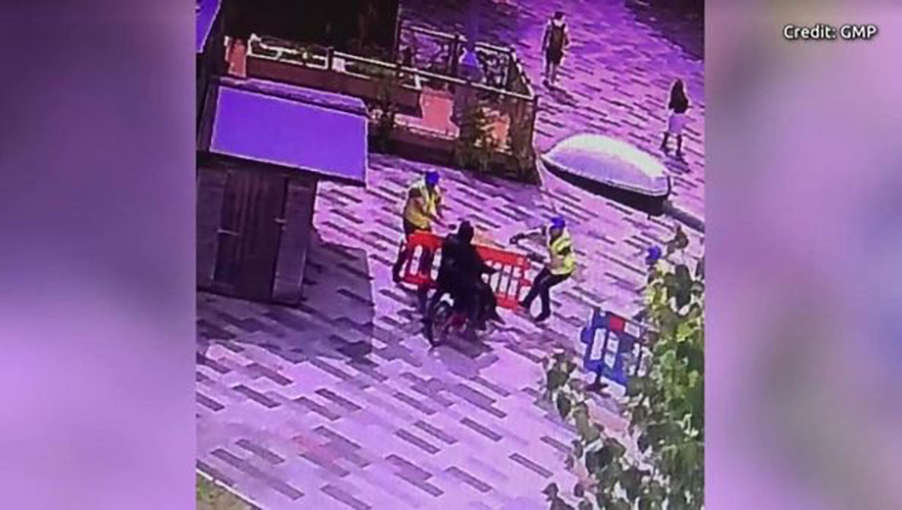 This is the moment undercover police officers dressed as builders swooped to arrest two men on an electric bike at a university campus on suspicion of drugs offences, Manchester Evening News reported.

Both were also held on suspicion of possession of a bladed article and driving offences. A knife, suspected drugs and cash were also seized in the covert operation. Video footage of the dramatic swoop at the University of Salford was released by Greater Manchester Police's (GMP) Salford division.

It shows three officers - all wearing high-vis jackets and blue PPE hard hats - stood in what appears to be a courtyard area at the university as the bike approaches. They move into position and a plastic barrier is used to slow the bike.

One officers leaps on top of the bike as it falls to the ground and the other two then pounce to make the arrests.

A spokesman said: "As part of Operation Sycamore, a force-wide operation to tackle violent crime, officers arrested two males on suspicion of drug offences, possession of a bladed article and driving offences. A knife, suspected drugs and cash were also seized.

"Officers dressed as builders so they could blend in with their surroundings, avoiding detection." No ages for the two arrested have been revealed. GMP also haven't confirmed when the arrests were made.

Sergeant Matthew Atherton said: "The arrests made at the university campus are just one example of our proactive response to gang-related crime in our communities. Fighting drug and knife crime remains a top priority for us, to ensure that Salford is safe for all who live and work here.”