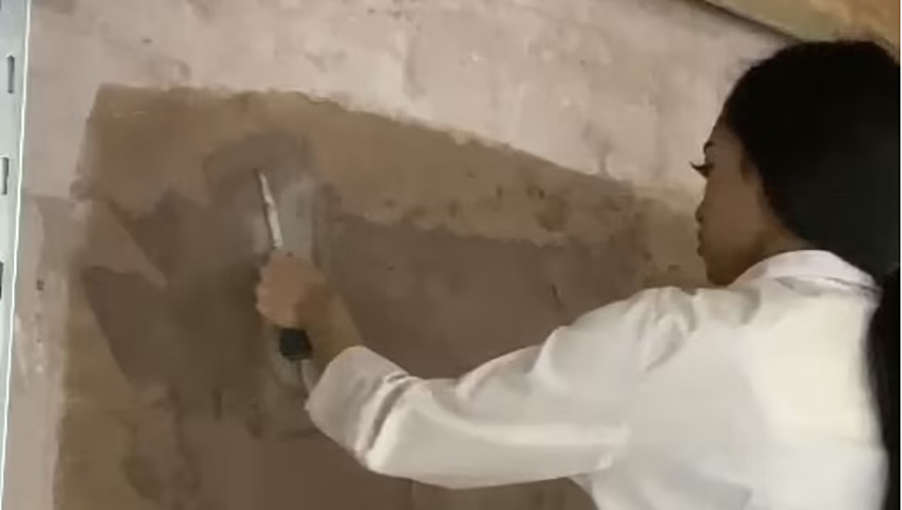 A female plasterer who does construction work while wearing 2.54cm nail extensions has said she is constantly criticised by men who think she is in the wrong industry.

Hannah Uddin, 18, from Coventry, West Midlands, told the Mail Online that she's been branded 'attention seeking' for pursuing a job in construction and has even faced men telling her she's 'taking up space' on her construction course.

The teen, whose builder father has been taking her to construction sites since she was just 12, went viral on TikTok after sharing footage of herself plastering walls while wearing her acrylic nails.

The aspiring construction worker, who plans to use her skills to flip houses, split opinion online as some branded her a 'girl boss' while others questioned why she went to work wearing make-up.

But the criticism has not deterred the construction student, who says it encourages her to 'keep going' - even though people thought she was in the wrong class at first or told her the qualification would be a 'waste of time' for her.

Since taking up a construction course at college she has been supported by her family and teacher and the self-admitted “girly girl” is hoping to inspire other women to consider a career in the construction industry.

Hannah said: “Just because I wear make-up and have long nails, that doesn't stop me from doing what I like. That was the point of the video.

“The way I see it - if I look good, I feel good, then I'll be able to work good. I've been getting nails like this since I was 13, so it's normal to me now. I can work away with nails.”

But the criticism has not deterred the construction student, who says it encourages her to “keep going” - even though people thought she was in the wrong class at first or told her the qualification would be a “waste of time” for her.

Hannah mainly credits her interest in building to her dad, who is a plasterer, bricklayer and interior designer.

Hannah said: “I've been doing construction work with my dad since I was around 12. It was through him that I got interested in this, he's my biggest inspiration.

“I used to always volunteer to go along with my dad when he'd work on projects. He'd let me tag along and learn the basics.

“I enjoy doing it, and as I was looking into it, I realised it was a good career path to follow. It's the one industry that will never die out - people will always need something built.

“I do work on my dad's site and we also have a booth at college that we do work in.”

Further down the line, Hannah wants to put her skills to work and flip houses for sale.