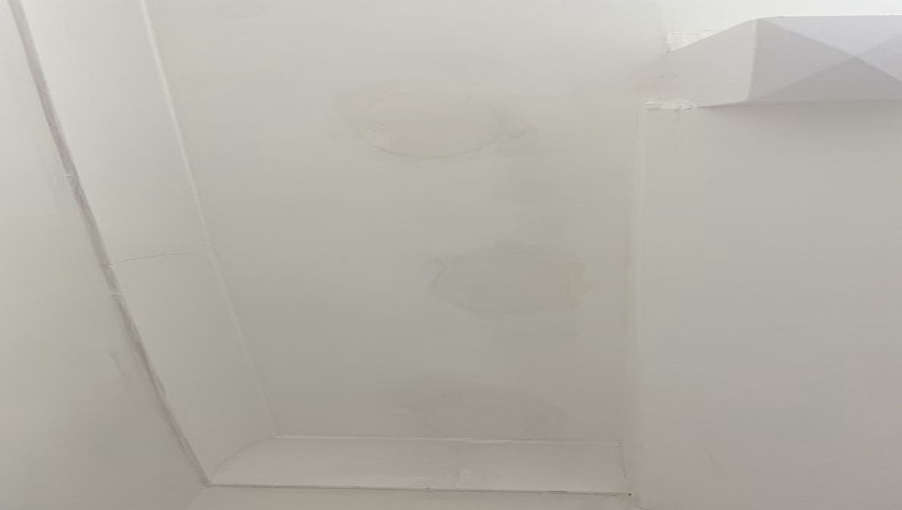 A single mum claims a 'cheeky' painter left her home in a 'shocking' state - but had the audacity to post selfies bragging about 'sitting down on the job' and 'doing **** all all day'. Jessica Burton had saved to have her home renovated last month when she decided to hire painter Paul Trythall, but says he turned up to work for just two days before leaving the job 'unfinished'.
CoventryLive reports that the 37-year-old claims the tradesman made several excuses and failed to show up for work for three days, before she spotted he'd posted a picture from his bed on Facebook claiming he'd done 'absolutely **** all day today' - after failing to return her calls or texts. Paul even uploaded selfies while relaxing on her black leather sofa and boasting he was 'sitting down on the job ffs' while covered in splatters of paint.
Now Jessica says her house was left 'a mess' and she was forced to pay out a further £200 for another painter to finish off Paul's work. However Paul claims he 'works quick' so is 'entitled to sit down whenever' he feels - and claims he'd have had the work done in two or three days but had been 'hit off balance' by Jessica not feeling comfortable leaving him in her house on his own.
Jessica, from Merthyr Tydfil, said: "It's horrendous and so upsetting. It's been really stressful for me and it's costing me more money now to try and put it right. Basically, he came, turned up on the Wednesday and Thursday at 10.30 and he left by 4pm. It wasn't a full day's work.

"While he was there, he was uploading selfies while I was in the next room saying 'sitting down on the job'. He was sat on my sofa covered in paint - I thought it was really cheeky. He was one of those guys who didn't give a monkeys. He had that attitude of 'I do what I want'. He was a very cocky 'I'll do as I please' sort of guy.

"I saved really hard for it and I just thought I'd be done like he said in those couple of days. Over a week later, me and my children couldn't sit down. It was a mess. I saved really hard for this work. I haven't done my house out for a while now.
"The photos I have of the work are absolutely shocking. You would never leave someone's home like that even if you weren't a professional."
The mum-of-four arranged for Paul to start work on Wednesday, April 27, but claims she was disappointed when the trader left the following day at 4pm. She claims he then didn't show up and made his excuses on Friday and Saturday, before being completely unreachable the next day.

Jessica said: "Friday came, no sign of him. I gave it a while then rang and text but no answer. He wasn't professional at all. I spoke to him then and he said 'so sorry about today, I'll be there 8am. I'll explain then'.

"On the Saturday, I got up at the crack of dawn. I eventually got hold of him and he said 'something's come up with [a family member] but I'll be there this afternoon'. We sat and waited. There was no sign of him. He then promised he'd be there on the Sunday.

"I got up Sunday, waited, rang and text. I couldn't get anything out of him but he had the cheek to put a post on Facebook of him in bed saying 'I've done **** all all day'."

Jessica claims she was so upset at her home being left in a mess that she broke down in tears in front of a carpet fitter who had popped over with samples. Jessica said: "Me and the kids couldn't keep living like that. The carpet fitter came with samples and I burst into tears. I said 'come in, take a look. This painter has left me and the children in this state'.”