Sausage Vending Machines - Coming To A Site Near You?!

We like giving back to the trade - that's why we run our bacon butty tours going around building sites handing out free breakfast to lads and ladettes on site, courtesy of Fix Radio.

However, when we read that sausage vending machines might be the thing of the future we were intrigued.

It's not surprising that this new phenomena has been happening in Germany (of all places!).

Most of the time you will find these machines outside butchers' shops...which makes sense. They stock different varieties of sausage so you can choose what sort of mood you're in. Apparently you can get up to 4 different varieties of sausages (which is more than most cafes!). Not only that, they even provide customers with a small serving of potato salad to wash it down with.

According to a survey by the German Press Agency, the sausage vending machines are “booming” outside German cities where shops are less likely to stay open for long hours. Just imagine being able to get a bratwurst on the way home from the pub, or a frankfurter after a heavy night out!

But, it doesn't stop there. In Germany they also have other machines that allow customers to buy vegetables, fruit, butter, milk and other essentials. That means that the dreaded weekly shop could become a thing of the past, and dinner could come courtesy of the local vending machine! 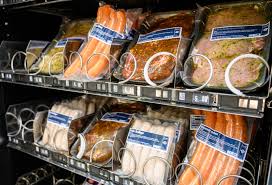 Now, we think this is a brilliant idea. In fact, we thought it was so good, we couldn't believe that no one else had done it. Then we looked into it, and they have!

In Singapore, at the start of the year, they had a very similar idea. They trialled salmon vending machines! The first of the salmon ATM's appeared in Wisteria in a shopping mall in January. They proved so popular there have been more and more popping up!

The automated machines are a way for the company Norwegian Salmon Pte Ltd to sell its products at a lower price. Think about it ,there's no cashier or even a storefront standing between customers and their salmon so it's cheaper for them, and ultimately cheaper for the customer.

But, then someone told us that this has already begun happening in The UK!

For example, The Nunton Diary Farm (off the A36 in Salisbury) have begun selling their milk from vending machines in a car park slap bang in the city centre! The dispenser gives people a chance to buy pints of milk directly from the dairy. The milk is poured into glass bottles and away you go. It costs £2 for the first bottle and then £1.10 if you reuse it.

The Town Clerk draws his first pint of free range milk from the @NuntonFarmDairy milk machine in South Street Car Park. Fresh, local, delicious milk in glass reusable bottles. Saving the planet one pint at a time - what is not to love? pic.twitter.com/0IAJtvd1ur

And if that wasn't enough The Co-op tested chilled meal deal vending machines at the Reading Festival. They held more than 400 items including sandwiches, crisps, healthy snacks, fruit, chocolate and drinks.

So, vending machines could be the new shop fronts. And if that means that you don't have to try and battle with a trolley round your local Asda (or Sainsbury's if you're posh!)