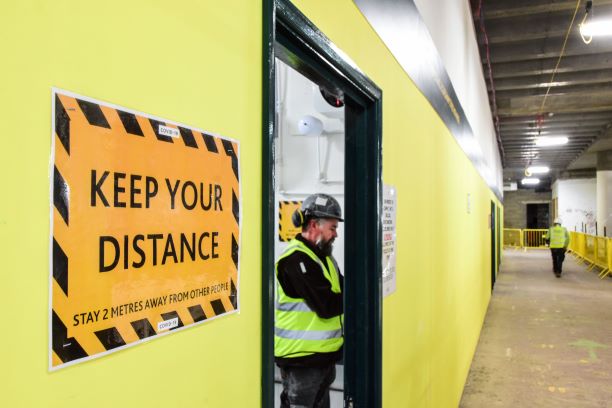 The Construction Industry Council is reviewing its coronavirus Site Operating Procedures in the wake of the government’s decision to relax the so-called two-metre rule.

The Construction Industry Council is reviewing its coronavirus Site Operating Procedures in the wake of the government’s decision to relax the so-called two-metre rule.

The prime minister has announced that from 4th July it will no longer be required for everyone to stay two metres apart.

“Where it is possible to keep two metres apart people should,” the prime minister said. “But where it is not, we will advise people to keep a social distance of ‘one metre plus’, meaning they should remain one metre apart, while taking mitigations to reduce the risk of transmission.”

These ‘mitigations’ include face-masks, protective screens, improved ventilation and the provision of hand sanitiser.

As a result of the switch from two metres to one metre plus, the Construction Leadership Council (CLC) is now reviewing its own guidance, including both the Site Operating Procedures and the guidance for related industry workplaces such as builders’ merchants.

This will be the fifth version of the Site Operating Procedures; Version 1 was published on 23rd March and Version 4 on 19th May. Throughout the various iterations, the issue of social distancing has proved thorny for the authors. Version 2 was ripped up just a few hours after publication for taking too strong a line on the topic.

Version 1 said that contractors should do their best to observe the two-metre rule and had the sentence: “There will be situations where it is not possible or safe for workers to distance themselves from each other by two metres.”

Version 2 added a crucial extra sentence, saying: "In these situations, work should not be carried out."

Version 3 returned to the ‘two metres where possible’ line but added that working in closer proximity should be restricted to periods of 15 minutes or less.

Version 4 then removed the requirement for face to face contact to be kept to 15 minutes or less, instead saying ‘minimise the frequency and time workers are within two metres of each other’.