The Night Shift playing D:ream - U R The Best Thing

After 261 years London's oldest builder is on the move 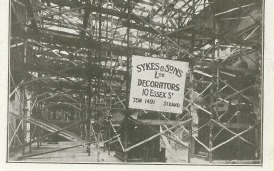 Sykes & Son Limited has been based on Essex Street, just off The Strand in London WC2 since 1759. Next week it is moving out.

But it is not moving far: it is moving to Sykes House, a purpose-built, energy efficient office in Bloomsbury, just a mile away.

“We will remain as close to the heart of our operations in central London as our Essex Street home,” said bid manager Jon Burr.

Sykes & Son was formed by John Willis in 1759 (the same year as Guinness) and its earliest records show that it worked at St Clement Dane’s Church in 1759 – where it worked again some 250 years later. It roots were as a glazing and plumbing contractor but has grown into a multi-disciplined contractor, turning over about £30m a year. In 2019 it made a pre-tax profit of £1m on turnover of £28.6m.

“We’re incredibly proud of the part that we have played in restoring, building, refurbishing and maintaining our capital’s heritage over the years,” Jon Burr said. “From royal palaces to world renowned museums, galleries and universities, we continue to forge long-term working relationships at London’s finest buildings.”

While Sykes & Son has been in Essex Street from the very beginning, it has not always had exactly the same offices in that time. In fact, over the years it has occupied seven different premises in the street, as the image below indicates.