Carpenter Who Cut Off His Hand Has It Reattached!

When carpenter Anthony Lelliott virtually cut his hand off in an horrific accident using an electric saw, he knew a permanent amputation was on the cards.

spending around 17 hours in total operating on Anthony Lelliott’s hand , surgeons at St George's Hospital managed to successfully re-attach it, despite it being left hanging by skin and bone. The team worked from 8pm till the next morning at 9am to salvage the hand

Mr Lelliott, 46, from Walton-on-Thames, in Surrey, suffered the horrendous injury while cutting floorboards.

Mr Lelliott, from Walton-on-Thames, remembers little of the accident that saw his hand mangled in a chop saw while cutting up floorboards on May 30.

He described being rushed into theatre thinking he would wake up without a hand.

Mr Adlard said in cases where amputation was a possibility he did not like to promise his patients anything beyond the fact he would do his best for them. 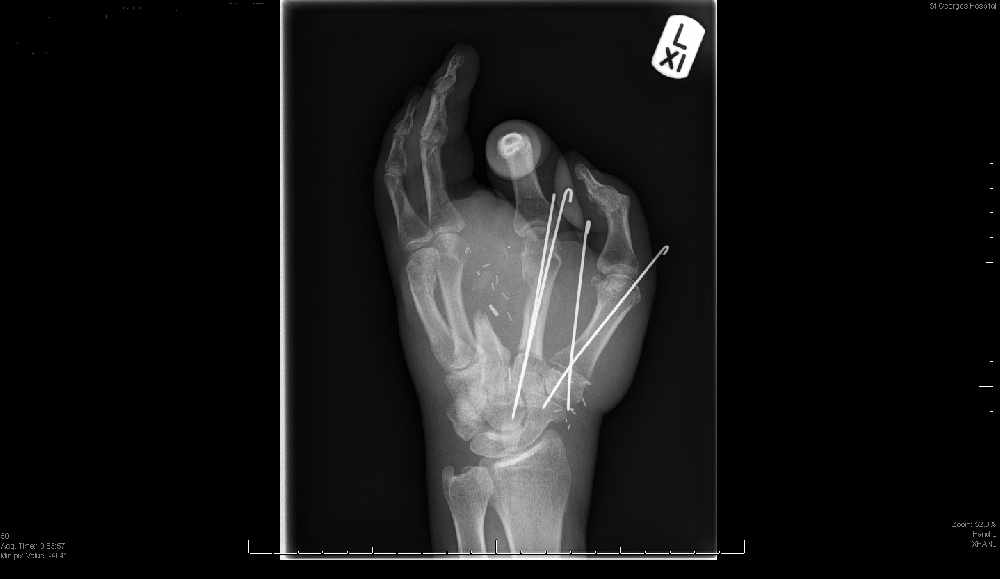 To ensure the best chance of success the plastic surgeon called on his colleague Farida Ali for the initial operation, and two other specialists Jamil Moledina and Sonja Cerovac for subsequent operations.

During the surgery they found there was not enough skin to cover his palm and so they called in another specialist colleague, Jamil Moledina, to attach the hand to his groin in an effort to grow more skin. After fixing his broken bones, doctors harvested nerve and vein grafts from his forearm and foot respectively, using them to bridge gaps across his wounds.

After the initial operation the surgeons made the decision to sacrifice Mr Lelliott’s middle finger when they noticed it had little feeling to it. After the operation, the doctors noticed some of the skin on Mr Lelliott's palm was infected and dying and that his middle finger was still too badly damaged to be saved.

Three months on from the accident, Mr Lelliott has already regained some movement in his hand, with the assistance of the hospital’s hand therapy team.

The surgeons at the hospital in Tooting, south-west London, say it is one of the worst cases they have ever seen.